Our analysis of information shared on Twitter during the 2016 U.S. presidential election has found that social bots played a disproportionate role in spreading misinformation online. The study, published in the journal Nature Communications, analyzed 14 million messages and 400,000 articles shared on Twitter between May 2016 and March 2017 -- a period that spans the end of the 2016 presidential primaries and the presidential inauguration on Jan. 20, 2017. Among the findings: A mere 6 percent of Twitter accounts that the study identified as bots were enough to spread 31 percent of the low-credibility information on the network. These accounts were also responsible for 34 percent of all articles shared from low-credibility sources. The study also found that bots played a major role promoting low-credibility content in the first few moments before a story goes viral. We also identified other tactics for spreading misinformation with Twitter bots. These included amplifying a single tweet -- potentially controlled by a human operator -- across hundreds of automated retweets; repeating links in recurring posts; and targeting highly influential accounts. To explore election messages currently shared on Twitter, we also recently launched a tool to measure Bot Electioneering Volume. Created by OSoMe Ph.D. students, the program displays the level of bot activity around specific election-related conversations, as well as the topics, user names and hashtags they are currently pushing.

Update: This paper is ranked #3 most read among all articles published by Nature Communications in 2018. 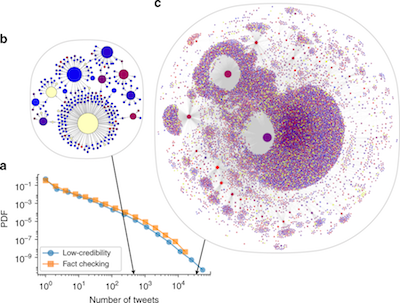