Researchers at CNetS, IUNI, and the Indiana University Observatory on Social Media have launched upgrades to two tools playing a major role in countering the spread of misinformation online: Hoaxy and Botometer. A third tool Fakey — an educational game designed to make people smarter news consumers — also launches with the upgrades. Hoaxy is a search engine that shows users how stories from low-credibility sources spread on Twitter. Botometer is an app that assigns a score to Twitter users based on the likelihood that the account is automated. The two tools are now integrated so that one can now easily detect when information is spreading virally, and who is responsible for its spread. Hoaxy and Botometer currently process hundreds of thousands of daily online queries. The technology has enabled researchers, including a team at IU, to study how information flows online in the presence of bots. Examples are a study on the cover of the March issue of Science that analyzed the spread of false news on Twitter and an analysis from the Pew Research Center in April that found that nearly two-thirds of the links to popular websites on Twitter are shared by automated accounts. Fakey is a web and mobile news literacy game that mixes news stories with false reports, clickbait headlines, conspiracy theories and “junk science.” Players earn points by “fact-checking” false information and liking or sharing accurate stories. The project, led by IU graduate student Mihai Avram, was created to help people develop responsible social media consumption habits. Apps are available for Android and iOS platforms. 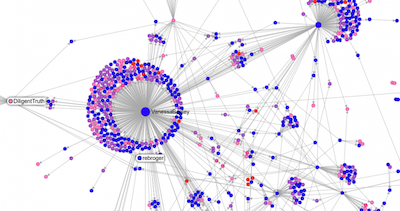