Research on detection of social bots by OSoMe faculty members Alessandro Flammini and Filippo Menczer, former IUNI research scientist Emilio Ferrara, and graduate students Clayton A Davis, Onur Varol, and Prashant Shiralkar was featured on the covers of the two top computing venues: the June issue of Computer (flagship magazine of the IEEE Computer Society) and the July issue of Communications of the ACM (flagship publication of the ACM).

Social bots are often benign, but some are created to harm, by tampering with, manipulating, and deceiving social media users. They have been used to infiltrate political discourse, manipulate the stock market, steal personal information, and spread misinformation. The detection of social bots is therefore an important research endeavor. The IEEE Computer paper titled The DARPA Twitter Bot Challenge (preprint) presents lessons learned from the social bot detection challenge organized by DARPA, in which our team placed third among many large academic and research teams. The CACM article titled The Rise of Social Bots (pdf) reviews the potential threats of social bots and a taxonomy of the different detection systems proposed in the literature, including our own Botometer tool. 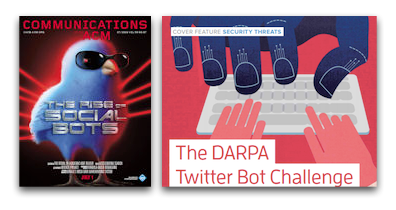