Filippo Menczer appeared on a panel of experts to discuss the emergence and dissemination of misinformation, and how it threatens society at the annual meeting of American Association for the Advancement of Science in Washington, D.C., Feb. 15.

Menczer was a part of a three-person panel and presented a talk, “Eight Ways Social Media Makes Society Vulnerable to Misinformation.” The talk provided an overview of ongoing network analytics, modeling, and machine learning efforts to study the viral spread of misinformation and to develop tools for countering the online manipulation of opinions. Menczer has previously developed systems such as Botometer, which detects social media bots, and Hoaxy, which maps the diffusion of low-credibility content.

“I was honored to speak at the AAAS annual meeting,” Menczer said. “The problems of disinformation and manipulation of social media, on which our research lab is increasingly focusing, have been recognized as major societal threats harming our health, security, speech, and democracy. It’s exciting to be on the front lines in this fight.”

“Our vulnerabilities to online manipulation stem from a complex system of behavioral, social, and algorithmic biases, as well as exploitations of these biases through bad technological actors such as social bots,” Menczer said. “The makeup of our panel on Fighting Fake News at AAAS provided a nice model of the coordinated and interdisciplinary research effort that we believe is needed to untangle such a complex misinformation ecosystem.” 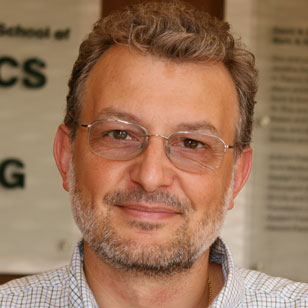