While social media have brought about a more egalitarian model of information access, the lack of oversight from expert journalists makes the users of these platforms vulnerable to the intentional or unintentional spread of misinformation. We observe hoaxes, rumors, fake reports, and conspiracy theories going as viral as legitimate news online. Media organizations are devoting increasing resources to the production of fact-checking information, which is consumed and broadcast by social media users like any other type of news content, leading to a complex interplay between news memes that vie for the attention of users. To date, there has been no systematic way to study the competition dynamics between online misinformation and its debunking. To address some of these challenges, we launched an open platform for the automatic tracking of both online fake news and fact-checking on social media. The goal of the tool, named Hoaxy, is to reconstruct the diffusion networks induced by hoaxes and their corrections as they are shared online and spread from person to person. Hoaxy will allow researchers, journalists, and the general public to study the factors that affect the success and mitigation of massive digital misinformation. Our early analysis, presented at the WWW 2016 Workshop on Social News On the Web, suggests that the sharing of fake news is dominated by very active users, while fact checking is a more grass-roots activity. Hoaxy has received wide coverage in the US and international press, including by Reuters, CNET, CNN, The Chronicle of Higher Education, The Christian Science Monitor, Quartz, Engadget, Vice, Fortune, Yahoo, Futurity, Daily Mail, El Pais, La Stampa, etc. 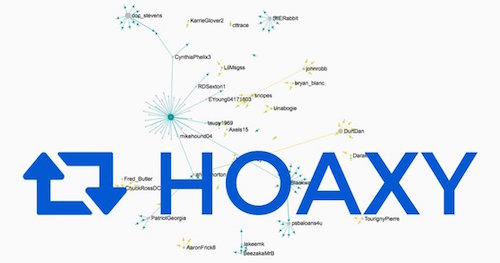